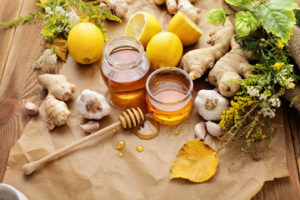 Safa Honey Elixir is a tonic made from the traditional blend of apple cider vinegar, honey, lemon, garlic and ginger. Known as the elixir of goodness that could help one get off powerful medications and reinvigorate internal body functions, this renowned blend is crafted to bring the body back to holistic wellness. A well-functioning immune system is the essential tool to fight any illness of the body and adding the right supplements to one’s diet revitalizes one’s immune system by bringing internal harmony and balance in the body’s varied but connected internal systems.

Also known as the super heart tonic because of the cardiovascular benefits of its natural ingredients, Honey Elixir is made with five renowned and well-loved health ingredients.

Let’s take a look at some of the proven health benefits of each ingredient. 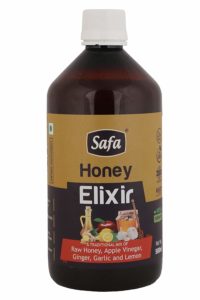 Honey: Besides acting as a natural sweetener in the tonic, is anti-bacterial, anti-viral, and anti-fungal and a well-known remedy for colds and cough. It also helps in weight loss, aids digestion, helps control diabetes and is good for brain health.

Lemon: High in vitamin C, which is a primary antioxidant that helps protect cells from damaging free radicals, is good for digestion, improves skin quality, promotes weight loss, helps prevent kidney stones. It also adds fresh flavor while it works as a natural anti-viral component in the drink, working in tandem with the honey to flush out viruses that attack cells.

Individually all the ingredients have a well-known plethora of health benefits and when they are combined together it has a synergistic effect that enhances the properties of each, while transforming into a potent natural remedy. The immune stimulating and enhancing properties of the various constituents of this tonic make it an ideal addition to one’s daily morning routine.

Here are some of the broader benefits of drinking this potent healing tonic. The anti-bacterial, anti-septic, anti-viral, anti-fungal and immunomodulatory properties of the natural ingredients in this tonic aid the effective running of the immune system. The ingredients in Honey elixir are also loaded with anti-oxidants and hence work like clean-up and protective agents inside the body, fighting the free radicals that cause unwell symptoms and diseases.  Apple cider vinegar is highly effective in cleaning the liver and the lymphatic system and in combination with lemon has a powerful alkalizing effect on the body, thus promoting detoxification and boosting immunity.
ACV will also regulate cell pH levels, which is extremely vital as disease can only thrive in an acidic environment. The raw honey in the solution acts as a nutrient-dense natural sweetener which supports the immune function. Lemons have a high content of antiseptic properties that are strong enough to kill the influenza virus and Helicobacter pylori (H. pylori). The presence of garlic and lemon ensure high levels of Vitamin C in this mixture which helps the body to produce glutathione, which activates the detoxing enzymes of the liver. This tonic also helps decrease inflammation and help flush out uric acid and other buildups in the body.

Apple cider vinegar and ginger have considerable advantages for cardiovascular health. Studies done on ginger have shown that it can lower cholesterol levels, as well as prevent blood from clotting in the arteries, thereby expanding the arteries and lowering blood pressure. Apple cider vinegar has a proven effect in significantly lowering cholesterol and triglyceride levels in the body. In addition, a compound called chloroauric acid, present in apple cider vinegar can protect the body from bad cholesterol (LDL). Acetic acid, the major component in all vinegars has been shown to reduce hypertension and also lowers presence of fatty acids within the body. Thus the combination of these ingredients reduces the risk of stroke/heart attack., stabilizes blood pressure, increases blood flow and enhances calcium pumping within the cells of the heart which is vital to heart health.

Garlic is an extremely useful herb in treating swollen lymph nodes. Garlic has strong anti-inflammatory, anti-bacterial, anti-viral and immune-supporting compounds that assist the immune system in getting rid of invaders and reduces the load on the lymphatic system. Lemon heals the mucus membranes in the throat and mouth and are highly effective in relieving the pain and swelling of lymph nodes. The combination of lemon, garlic and apple cider vinegar provides a thorough bowel cleanse and moves excess mucus from the intestines.

There is strong scientific evidence showing that vinegar can improve glucose tolerance and reduce the body’s blood sugar levels. The acetic acid present in vinegar also helps lower the glycemic index of carbohydrates, which in turn prevents sudden spikes in blood sugar. Apple cider vinegar, in particular, can help with insulin resistance and type 2-diabetes. Twenty grams of apple cider vinegar consumed before a test meal of bread, butter and orange juice resulted in significantly reduced insulin and glucose responses in the people with type 2 diabetes or insulin resistance. A study on apple cider vinegar showed that it improved the serum lipid profile by decreasing serum TG, LDL-c and increasing serum HDL-c and therefore may be of great value in managing diabetic complications.

Ginger contains therapeutic compounds that aid digestion and promote detoxification. In combination with honey, garlic and lime, it has been a traditional remedy for digestive issues in several cultures. The fifth ingredient on this tonic, apple cider vinegar has also been shown to improve digestive function and works to cleanse the liver. Apple cider vinegar also contains large amounts of pectin, which is a soluble dietary fiber. A lack of fiber is a common cause of constipation and other digestive issues.  Even though this solution while has an alkalizing effect on the cells of the body, it has an acidic effect on the stomach, hence helping the body create more pepsin, which is the enzyme that breaks down protein and speeds up the digestive process.

Arthritis is an inflammatory condition that causes significant pain and swelling in the joints, damaging them and restricting mobility. There are many different types of the condition, but almost all cause pain and inflammation in a joint.  While there is no study done to show direct correlation of arthritis pain relief on consumption of apple cider vinegar, it is anti-inflammatory and has a long history rooted in traditional medicine of being used for the treatment of arthritis and joint pain. It has been popularly postulated that apple cider vinegar’s antioxidant beta carotene and acetic acid content produces miraculous effects in easing pain from arthritis. Besides, the potassium in apple cider vinegar works to prevent calcium build-up in the joints, which is linked to joint stiffness.
Apple cider vinegar is also rich in minerals like phosphorus, calcium, magnesium and potassium. Mineral and vitamin deficiencies are the root causes of many health problems, and if not detected, deficiencies can worsen health problems including arthritis and joint pain. A diet or the intake of a tonic such as Honey Elixir which is rich in essential minerals could be a great step to relieving arthritic pain.

The ingredients in Honey Elixir have a significant effect in boosting metabolism and promoting weight loss in the body. Honey, lime and apple cider vinegar are known to contribute to the burning of extra fat deposits in the body. Lemon and garlic contain vitamin C, which is inversely related to body mass according to an article published in the ‘Journal of American College of Nutrition’ in 2005. The acidic content of the lemon lowers the absorption of sugars from the food you eat. Which basically means that less sugar will be turned into fat. According to a study published in Bioscience, Biotechnology and Biochemistry, acetic acid, the main component of vinegar, when administered to obese and diabetic rats increased the expression of genes that reduced fat storage in the belly and liver, while preventing weight gain. The team of researchers also investigated the effects on obese Japanese in a double-blind trial and concluded that daily intake of apple cider vinegar might be useful in the prevention of metabolic syndrome by reducing obesity. Moreover, Honey Elixir is nutrient dense and therefore could reduce one’s appetite while maintaining high energy levels.

sides the afore-mentioned points, the apple cider vinegar in this tonic is immensely beneficial in regulating blood pressure and blood sugar levels, alkalizing the body and maintaining oral health. While the taste is disagreeable for some at first, it is quickly acquired and the honey makes up for the sourness of the vinegar.

Honey Elixir is best taken on an empty stomach in the morning and/or half an hour before meals at night. One can take one or two tablespoon based on personal requirement – some people may require less and some more. The benefits of this tonic are best experienced by the user through regular use.

The ingredients we use for making Safa Honey elixir are sourced ethically and undergo a stringent process of quality verification. The honey we use in the tonic is raw and unpasteurized. Our apple cider vinegar contains the “mother” which is a cobweb-like substance made from yeast and bacteria. This gives the vinegar a cloudy appearance and boosts the vinegar’s nutritional value. However, most vinegar in the market is filtered and pasteurized. This heating process kills bacteria but prevents mother of vinegar from forming. At Safa, we go to great lengths to ensure that the ingredients we use are of the highest quality, completely pure and natural and ethically sourced – a trait acknowledged by our loyal customer base and something they have come to always expect from us.

*Disclaimer : The points presented in this article need not necessarily reflect the views or opinions of the manufacturers or sellers and this product is not intended as a substitute for advice from your physician or other health care professional.

Hanim Kallangodan is a digital marketing executive and content contributor at Safa.
View all posts by Hanim Kallangodan
5 Ways to Supercharge your Breakfast with the Goodness of Honey 5 things that start happening when you take honey everyday!